Australia’s great and diverse land is equally matched by its spectacular underwater environments.

I have been a scuba instructor for 40 years and during that time have met some awesome people and experienced many spectacular dives all over the World.

But, believe it or not, most of my best diving has been in Australia.

When talking to people, particularly other scuba divers, the most common question I get asked is “How good is the Great Barrier Reef?” This question disappoints me because, although the Great Barrier Reef offers some fantastic diving, most divers are simply not aware of the great diving other parts of Australia has to offer.

That’s a lot of diving!

Most Australians live on the coast and along with the thousands tourists who visit Australia each year it is easy to understand why Australia is one of the most dived countries in the World.

Australian waters also have an absolutely bazaar collection of exquisite marine creatures such as the leafy sea dragon, found nowhere else on earth.

I hope ‘50 Great Australian Dives’ inspires divers from around the world, including Australians, to venture beyond the Great Barrier Reef to discover the other great secrets found beneath our waves. 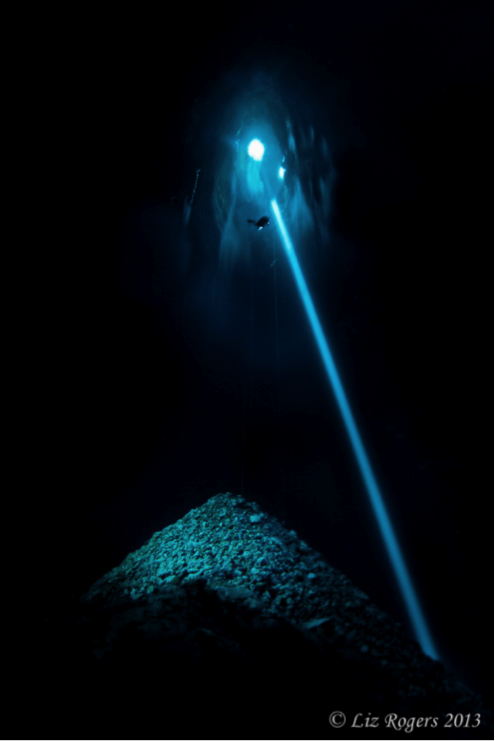 In a windswept paddock on Ashby’s Farm, a short distance from Mount Gambier, there is a tiny hole in the ground barely big enough for a person to slip through. This hole is the entrance to one of the best and most unique sinkhole dives in the World, ‘The Shaft’.

Who would have thought beyond such a small hole there was a huge cavern with a diameter as big as a football field filled with crystal clear water extending to a depth beyond 60 metres (200’)?

Certainly not the farmer who, a long time ago, tried in vain to fill it! He is responsible for the ‘Rock Pile’ at 35 metres (115’).

‘The Shaft’ has a sad history though. It was very popular in the late 1960s and early 70s but unfortunately, in 1973 four divers, three men and one woman, lost their lives diving too deep without redundant air or guidelines and the effects of Nitrogen Narcosis.

The water level is about 10 metres (30’) below ground level and requires a rope ladder and winching equipment to reach a small ledge where divers can gear up.

The best time to experience ‘The Shaft’ of sunlight, which gives the dive its name, is during the summer months when the sun is higher in the sky.

The Shaft is a dive fulfilling any of the superlatives used to describe a great dive.